The Only Easy Day Was Yesterday

So much has happened these last two months, that it is hard to believe anything actually happened!

I guess I will start by saying that I am doing ok. I have been trying to get in with doctor's for follow ups and stress testing after my Boulder incident, but I swear that it is causing more stress because no one friggin calls back! Things have been settling down a bit in life since Boulder, but man does it still sting.

I still can't believe that I ended up in an ambulance (AGAIN) and my pursuit for an IM PR and AG podium continues. I guess now that I am a few weeks removed, I can recognize that I was sick and probably not in the greatest mental state since we buried dad the week before. To be quite honest, I wasn't ready for how hard it was to actually bury him (I pretty much lost my shit to mom, Izzy, and Liz after they got me from the med tent). I feel like the last year I have been able to convince myself that it isn't real, but now it is very much real and it feels like the grieving has started all over again. The fact that he is just gone still keeps me up at night and the initial panic every morning of him not being in this world anymore is excruciating. That said, the Arlington service was amazing - it just sucks that it was my dad being buried. I don't know how to put in words how special his service was for me and my family. It isn't lost on me that this was essentially my last "duty" as a military brat. I still remember how scared I felt when dad left on "cruise" when I was a kid because I was afraid he wouldn't come back. And now, at 34 years old I am still terrified and faced with the fact that he isn't coming back. I still can't process this and am tired of life just continuing to move forward. It's like people refuse to acknowledge that this happened and assume I have just moved on. I get it. People don't want to talk about it, but it really sucks that I essentially got 4 days off from work and am just expected to be ok. I can't say it's been an easy adjustment since getting back and going through this again, especially with some recent developments at work. A lot is being asked of me right now and I find myself getting angrier and angrier with the situation. 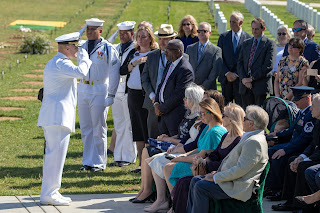 And that is my heart breaking all over again. 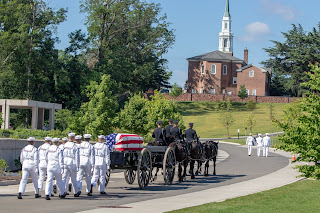 I am not a very religious person, but dad is buried with Old Post Chapel keeping watch.

Thankfully, I have some outlets. I did IM 70.3 Lubbock a few weeks back and it was awesome. After Boulder, I took a few days off and decided to sign up because I really had nothing to lose. After a short build back up, it was off to Lubbock. I also chose this race because it was my very first half ironman in 2013. My dad was there to see it. It was nice going around Lubbock with mom remembering a lot of the funny moments and places we went with dad. This was a bit of a different race for me. For starters, I was actually pretty relaxed because I didn't have any expectations except to finish. My second goal for the race was to see how far into the hurt locker I could dig myself into. I fully expected death on the run since I was completely unprepared for the heat. All goals were accomplished and I spent the last 8 miles of the run wanting to die. In fact, at the mile 12 aid station, I told a volunteer to "just kill me." Why put myself in that situation? Because I needed to know I could. After Boulder, I have been going back and forth with "am I just not tough enough for this?" So I wanted to really bury myself. I am glad I did - I took some risks on the bike that I normally wouldn't. I think knowing that I can get through that kind of pain only gives me more confidence moving forward and taking the next steps to getting better. It also helps that squeaked out a 30 sec PR with a shitacular run. I finished within 20 sec of my high school swimming team mate, Amy, so it was a pretty amazing and special day. 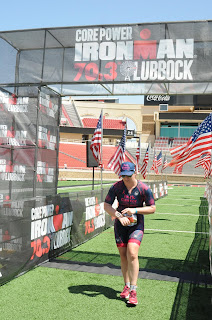 The relief and weight off my shoulders was overwhelming.

I guess to end I will say this. Things are hard right now, but I know better days will come so I keep trudging forward. Sometimes it really is about just taking one step at a time. Dad was right when he wrote his last blog when he said "something has to work in all this mess." You were so right dad , something will work. Maybe not tomorrow, but someday things will be better.