There are sometimes in life when you fall down and you feel like you don't have the strength to get back up.

"There comes a time when the blankness of future is so extreme, it's a blank wall of nothingness. It is horrible to contemplate a futureless future. The monstrosity of being alive overwhelms you."

This is how I have been feeling lately. I am angry, I am tired, I am feeling just hopeless. Friday morning I woke up afraid to leave my house (I have a anxiety and paranoia about being in public). I called in sick. I asked Logan to not go to a movie yesterday because I got overwhelmed about being in public while we were at Lowes. I am having serious doubts about myself and my future.

So why is that?

Sometimes I am so frustrated with the situation I am in with DOE/LANL I want to scream. I seriously just want to walk outside and get it all out. The most recent update in obtaining my security clearance is that OPM shut down the EQIP system, which means I can't even sign my paperwork to continue forward. They shut it down the day I was so supposed to sign the papers. REALLY?! I mean REALLY?!

It makes me wish I never got diagnosed. This is interfering with my career and my path forward. I can't continue to move forward with this not progressing. The problem is that I am a nuclear chemist, which means there are only so many places I can work. I am highly specialized and pigeon-holed in this field. It is pretty much government or bust since academia is NOT an option.

I WANT TO SCREAM. I recognized their concerns. I realize I made stupid decisions when I was younger and I realize I should not be drinking with bipolar or with the meds I am taking. They are right in that respect. And this last year of not drinking has truly been eye opening. BUT - it is the wait that is killing me and I feel shattered. It is making me regret my decision to become a chemist. I wish I had decided on something that is more employable. It feels like a waste of 9 years of my life. I could have enjoyed my 20s instead of being stressed. All for a PhD that is beginning to feel worthless.

SO what is the path forward? This is the first time in my life that I don't know what is next and it is terrifying.

How can I cope? As I mentioned above, Friday morning I was afraid to leave the house. I was having serious doubts about racing Saturday. I didn't want people to see me and I have been feeling extremely vulnerable. I was most definitely giving in to the blankness. So I started packing my race gear. I opened my front door and panicked a little. I was leaving the safety of my isolation. I loaded my gear into my car. I put my race wheels on my bike. I loaded my bike. I got in my car and started it and drove. I was digging myself out of the blankness one mile at a time. I was making myself look forward to something - in this case racing. This race was my "hope" on this particular day. I was going to do something that I enjoy. And I had a good race, especially after doing a half ironman less than two weeks prior. This day, I had won the battle against my mind. Another day moving forward. So while I am feeling like there is nothing, I am also finding small things that give me hope. The fact that I left my house gives me hope (I know some of you may find it silly, but I am giving you insight into the bipolar brain) and I have not given in to the blank nothingness that I am feeling. 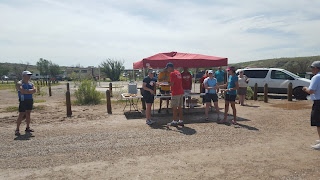 At least I can still smile during my low moments.
Posted by Lani Seaman at 9:41 AM 3 comments:

I tried and failed, but I didn't fail to try

This past weekend I raced BLST 70.3 and it was frustrating. Frustrating in the fact that nothing in particular went right, but nothing went wrong either. I have spent the last few days pretty much stunned with the way things turned out.

Physically, I was fine. I am nearly 20 pounds lighter, I have put on some serious leg muscle, and I am in the best endurance shape I have been in in years. I fully expected that this race would be my breakthrough race, but it wasn't. And that is a tough pill to swallow. The hardest thing about long distance triathlon is that if the race isn't going as planned, it is a long time to dwell on it. The key to salvaging your race is how you adjust mentally.

I realized things were off during the swim. It was not that I felt bad, it was that I didn't have that normal spark. It felt flat. I came out of the water at 26 min, which is slow for me on this course. I told myself that it was fine - the race does not completely rely on the swim. I changed my focus to the bike where I thought I could make up some ground. Climbing the hills out of the park felt ok, but again, flat. I kept churning my legs just trying to get up to speed, but going no where. It is so hard realizing that it wasn't happening today, but I had to keep going. I had to make this the best race I could. About 2 hours in, I knew I was not going to make my sub 3 hour goal. I had a moment of thinking why I did this to myself? Why do I work so hard, just to fail? Most of you know that I read a lot of inspirational writing because it helps me get through the days and deal with my disease. At that moment I thought of one I had read recently, which said:

"Don't cry to give up, cry to keep going. Don't cry to quit, you're already in pain, you already hurt, get a reward from it."

With one mile left, I was cutting it close to getting under sub 6 hours. Oddly, after thinking I was hydrated (I hadn't shown any signs of dehydrated and I was peeing - I know gross) I started to stumble. What the hell? Keep going. Get a reward from it. Almost there. You can cry. Get a reward from it. I finished under six hours with 10 seconds to spare. I got a reward from it. Immediately crossing the line I found myself in the med tent (again) with an IV stuck in my arm. What happened? What went wrong? I don't get it. After getting out of the med tent when I could stand again, I saw my mom and cried. I was heartbroken.

In the days that followed, I talked to my coach about things. In discussing all the possibilities of factors that went wrong, we got on the subject of my meds. I am on wellbutrin and one of her other athletes had been on it before. When she raced in the heat, she would end up in the med tent, DNFing, and have odd hydration/salt/hyponatremia problems. Her doctor ended up saying it may be from the wellbutrin because when she went off it, she didn't have the issues. Apparently wellbutrin acts on the hypothalamus to regulate the seratonin dopamine re-uptake and in doing so affect thermoregulation and causes increased sweating. So basically, even though I felt like I was hydrated, I wasn't. Rough. Sometimes I get really frustrated with meds. Zoloft made me gain weight and retain it. Wellbutrin is allowing me to lose weight, but it affects my metabolic pathways. There seems to be no happy medium.

Although I didn't have the race I wanted, I did get to race in my super sweet bipolar race kit and my mom wore our team Lani shirts. We got a lot of great feedback about our cause. My mom mentioned people really liked our idea. In fact, even the HEAD race official and a paralympian thought is was wonderful. I feel like triathlon is a great place to grow my cause and reach out to people. The only thing I wish I added to my kit was my website (this blog - laniseaman.com). With all the great feedback I have been getting about my blog and my ability to spread the word about mental illness, I reallly hope to one day turn this into a non profit and raise money for treatment and support for those suffering. Now I am just trying to think of a name (it is Team Lani right now) and a slogan. So far I like "I'm bipolar, not crazy." I am open to other suggestions too, so if you have any ideas or would like to help get this off the ground and spread the word let me know! 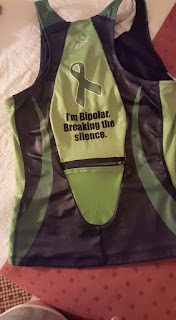 Posted by Lani Seaman at 8:10 AM No comments: