Sometimes I question my sanity. It's been a hard month mentally and physically since Tulsa. As much as it doesn't seem like the crash didn't affect me so much mentally, I had many fears about getting back on a bike. The good news is that I have a great support team and they were here for it. For the first two weeks after Tulsa, I basically just let my body recover, but I still remained active. That first week was tough on me. Claire drove my doped up self back from Tulsa (thanks a million times over Claire) and that was probably one of the more painful experiences I've been through. My body did not want to be folded into a car and my muscles/bones were pretty damn bruised so it hurt to sit, and stand, and well, just exist at that point. Thankfully, lots of gentle yoga got me walking 2 miles with my amazing friends Therese, Nadia, and Claire by that Friday, 5 days post crash. I spent that weekend walking up a storm up and down County Road 84 😂 By the next week, I was back on the trainer, then I did a very uncomfortable walk/jog by the end of week two. My biggest accomplishment was that 2 weeks post crash, I was able to ride outside on my road bike with Liz to TVM because delicious breakfast will tempt me to face fears any day. Since I was at least jog-walking again, I naturally decided to sign up for Lubbock 70.3 which was only 3 weeks later. Definitely a bold move (insert Dodgeball reference here) since I was no in the best of shape and not even running! Luckily, 2.5 weeks before the race I did my first run, so I knew I would be able to finish even though the run was going to be very uncomfortable. I finally got back on the TT bike the week before the race and did a little mini brick run that didn't feel amazing, but at least I got back on the bike. So with my 2.5 weeks of prep, I was off to race.

Anyway, Lubbock was amazing this year. We had pretty much the best weather you could ask for in terms of temperature. Normally this race boasts triple digit temps on the run, so a high of 77 was unheard of. I went into this race with absolutely zero expectations and feeling more relaxed than I ever have pre-race. It probably also helps that I was just having fun with Liz and Amber and meeting all my Coeur teammies. Side note - TLC is pretty much the best prerace prep. Liz and I actually had to force ourselves to go to bed the night before and not stay up watching You, Me, & My Ex all night. We actually got a decent nights sleep, and for once I actually felt rested before a race.

My mom dropped Liz and I off at T1 and then headed back to the hotel so she didn't have to stand in the rain, but promised she would see us coming into T2. Cue my anxiety. It really is only fitting that it was raining and cooler just like in Tulsa. When I was standing with Liz at the swim start, I actually mentioned that this was making me nervous. I knew I just had to get through the bike, but getting there was monumental. The swim was decent - well I guess it was good since I was the first female overall out of the water, but my mind was basically just focused on getting through the bike. 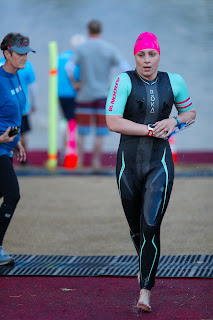 Once I got to the mount up line with my bike, I faced one of my bigger challenges - getting on the bike! Since I hurt my back, I've lost some mobility/strength in my side, so getting on the bike is actually tough. I took a deep breath, got on my bike like an 80 year-old, and off I went. My legs actually felt pretty bad and my back was not thrilled with me at all. Then I started panicking a bit because the roads were wet and the men were of course not yelling "on your left" when passing, so I really started to go to a dark place. My HR was getting high at 170 bpm and I was getting scared. I looked at my race files and it looks like I was riding pretty timid the first part of the race until the turnaround. Two things happened there that helped me: 1. I was close to halfway done. 2. I saw Liz about a mile after the turnaround. I don't know why, but seeing her reminded me that I can do this and that this is just another day on the bike. I guess it helps that we train together on the bike all the time, so that bit of comfort gave me a boost. At that point I knew I had to try and beat Liz to transition since this was just like training where I am holding on for dear life trying not to let her catch me. I started passing the men back and finally fell into a race rhythm. The rest of the bike flew by. I finally let myself glance at my time and promptly said "holy shit" because I was riding faster than I ever had. I honestly had no idea I could put down a bike split like that and I'm still shocked, but that is a testament to the work Liz and I put in over the pandemic, as well as all the Zwift racing. When I came into transition and after my geriatric dismount, I yelled to my mom that I didn't crash and breathed a huge sigh of relief. It was also the first time that I've ever come off the bike at the pointy end of the female race in a big race, so that was super motivating. 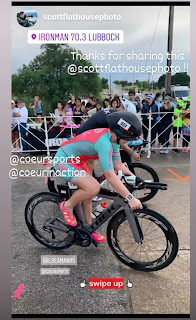 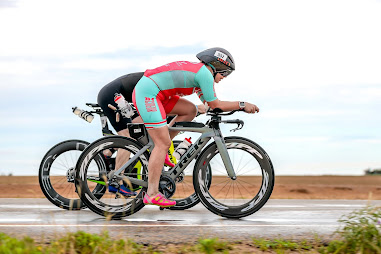 I'm glad my mount up was capture on camera and please excuse my bloated stomach on the second bike pic. I wish the sun was out to get all the pretty colors in Rainbow 2's paint! Also, Scott Flathouse is awesome - I was so stoked to see that mount up pic made his Insta stories!
The run was obviously the big question mark. I knew if I was having the run I was capable of before Tulsa, I would be close to breaking 5 hours, if I didn't, I still was going to have a huge PR. Turns out that my body wasn't capable of pre-Tulsa pace, but that wasn't much of surprise. I came off the bike feeling pretty flat and my back was like "seriously wtf are we doing," but I settled into a pace that I knew I could hold as comfortably as I could and that minimized the back pain. I am actually super  proud of this run - it was consistent, I didn't walk except to take on nutrition in aid stations, and I remained tough even when my back was telling me no more. Other than an unfortunate port-o-potty emergency at mile 2ish, it was an uneventful run. My pace was consistent and I just focused on my nutrition since it was good test to see how I would handle it at IM Maryland in September. I ran into one of my TCB teammies on my 3rd lap and she was on her second, so we got to run a good chunk of that together before I headed into the finish line. I was pretty shocked to see 5:07 as my final time for the race. Two years ago, I would have never dreamed that I was capable of that. I was 6th in my AG (damn 35-39 for being so competitive) and 14th overall, which is still unreal to me. This was my first time at an Ironman race racing at the top end and I can't wait to see what I can do fully healthy and at peak fitness. Ultimately, I just feel relieved and incredibly lucky that I was even able to race on Sunday. Finishing was the biggest win, everything else is just icing on the cake. 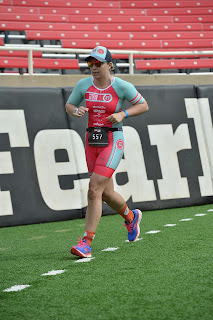 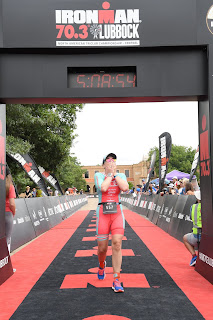 All the feels.
I can't thank all of you enough for the outpouring of support I have gotten since Tulsa. It takes a village to train and race these things and even more support is required coming back from an injury. Thankfully, I have the best coach, great friends and teammates, and the best family. I am not super spiritual, but I know dad was with me too. I think the reason that I came away from that crash with no serious injury, was because he kept me (and the bike 😆) safe. Knowing how hard I was hit and the cracking in the helmet further confirm that for me. Needless to say, keeping him in my thoughts Sunday helped get me through that bike mentally and I only wish he was here to tell him about my bike split. I can see the face he would make and the same "holy shit" that came out of my mouth when I saw it 💓
Posted by Lani Seaman at 4:54 PM No comments: