When did I become such an advocate for mental illness? For quite a few years after my diagnosis in 2008 I was ashamed and mortified. Why ashamed? I was an (and still am) overachiever and I was very good at everything I did. I had just come of a perfect senior year of college and was beginning my journey of obtaining my doctorate. So I kept asking myself how, when, where, why did things go wrong?

I was actually trying to describe to a friend the other day how bipolar "feels." I can pretty much sum it up to saying I have a lot of feelings (mean girls anyone?). I feel more than normal people feel. When you feel sad multiply that by 1000 and you get how I feel. When I am angry I am ANGRY. When I am happy, I friggin happy. Imagine life in a mind that tumultuous. It is never settled and always racing. So when people think the meds make things go away, that is not the case. The meds suppress the moods and feelings. You still have to fight your mind just not as much as before. Something I have not written about is my story before diagnosis. I haven't been comfortable talking about it until recently because I was mortified that it happened to me.

I guess I have always showed symptoms throughout the course of my life, but I never knew what was wrong. As a kid, I had horrible separation anxiety and night terrors. I would seriously cry all night because I didn't want to be alone. Eventually it went away and we attributed it to me growing out of a phase. Back then we didn't know about the manifestation of childhood bipolar and I didn't find out until I was diagnosed. Fast forward a few years to middle school. Now most people would think that my abnormal behavior was due to puberty, which some likely was, but I was worse than most. We were stationed in D.C. and I pretty much snapped when my dad got orders to move to China Lake. My moods were extreme-more extreme than most teenagers. I had my first "boyfriend" that was not a very good influence and basically lashed out at my parents every chance I got. I started skipping swim practice, taking my moods out on my teachers, and being a bitch in general. Normal? I can't say that some teenagers don't act like that, but my moods were darker. Some days I was the nice normal Lani, but then I would revert back to my darker thoughts. After we moved China Lake, my cycling continued and it wasn't until my senior year that I actually felt "calm." Once I left for UNLV my symptoms diminished slighty because I was on such a strict schedule of swim-class-swim-class-study. However, I definitely had my moments. My moods were all over the place sometimes and I would still get very cranky and depressed.


Grad School. Wow did things unravel quickly. This section may make you uncomfortable - it makes me uncomfortable. When I started grad school, things initially were going well, but towards the end of my first quarter I really started to lose it. Without the regimented schedule from swimming, I really had nothing to hold me together. My life had no schedule. I partied on weekends, stayed out late weekdays, and worked long hours. All this was the perfect cocktail for disaster. My disease legitimately started to manifest itself. It was scary. My anxiety was through the roof. I don't really remember when I went to the emergency room for the first time for a severe panic attack, but I know I went at least twice before I went and saw a psych. At that point we only thought it was anxiety so we medicated for that and moved on. However, things got increasingly worse. My behavior got more erratic and by the summer of 2008 at I was in a full blown manic episode. I find the mania part of bipolar to be the most dangerous. In fact, most deaths/suicides come when someone is manic. You may ask why. The reason is that you do a lot of stupid shit. You don't sleep, you are invincible, you party a lot. When you party you mix substances (on top of your meds). The lack of sleep makes you delirious, so you basically exhibit symptoms of being drunk. You take a lot of risks because you don't consider the consequences. I won't go into detail of all the stupid crap I did, but after one particular night of partying I crashed. All the months of basically being on a high were gone. I went straight from my crazed manic state, to a deep depression. Anyone who has been serious clinical depression can understand how soul crushing it is. I am not even really sure words can convey it. I went and saw my psych and he came to the conclusion that I was bipolar. We started meds, but I can't say they really worked at that point because a few weeks later I was in the hospital.

Have you ever had the experience of walking into the ER and telling them "I want to kill myself?" I have. It was the week of Halloween 2008. I woke up one morning and just couldn't do it anymore. I called my mom in tears and she convinced me to call my psych. My psych suggested I check in to the hospital. So I voluntarily drove myself to the ER and told them I want to die and I need help. You heard that right. I went voluntarily to the psych ward. Here I was, 23 years old with my mind completely crashing in on me. But to this day, I still think I am one of the lucky ones. I was smart enough to know something was wrong and I had a great support system.

Want a sobering experience? Spend some time in the psych/drug recovery ward. My roommate was withdrawing from heroin. She was younger than me. There was a guy in there covered in bandages from cutting himself all over before checking in. It scared me. We were not allowed to have any sharp objects for obvious reasons. We were checked on every hour on the hour - you can do the math to figure out why. I was woken up several time during the nights for blood draws to make sure I was not on anything. The windows are barred. The patio area was barred. No cell phones. It was an interesting experience. I was put on some pretty heavy drugs to stabilize me. You may have heard me mention seroquil a time or two. Seroquil is a nasty, nasty drug. They use it to basically sedate you. In fact it is actually given to schizophrenics. It was a really lonely time, but it was necessary. I saw many psychs/councelors/nurses/doctors and basically had my whole life turned upside down. About year prior I was swimming at nationals and now here I was completely at rock bottom. I was only in a week and half, but I am pretty sure that week and a half saved my life.

So fast forward to where I am now. Why would I share this story? It is important for you and the general public to understand that mental illness in general is misunderstood. Most people ask me why I just don't get over it. The reason is I physically can't. It Is chemical and that is a hard pill for people to swallow. We don't want to acknowledge that mental illness is a real disease just like cancer. We shame it because we can't see the physical symptoms because it is all in the mind. I may not carry physical scars, but I do carry mental ones. So this leads me to why I want to share my personal journey with you - by reading this maybe some of you can stop looking at my illness as "mental" and look at it like a disease. I treat it just like any other disease. Maybe this will help you see symptoms in someone else and get them help. Maybe you are having symptoms and this makes you realize you need help. I am not ashamed anymore. I will leave you with some pictures of kits my family and I are working on for my triathlon racing season. We are hoping to help raise awareness and educate people this year! Maybe you will join Team Lani this year! 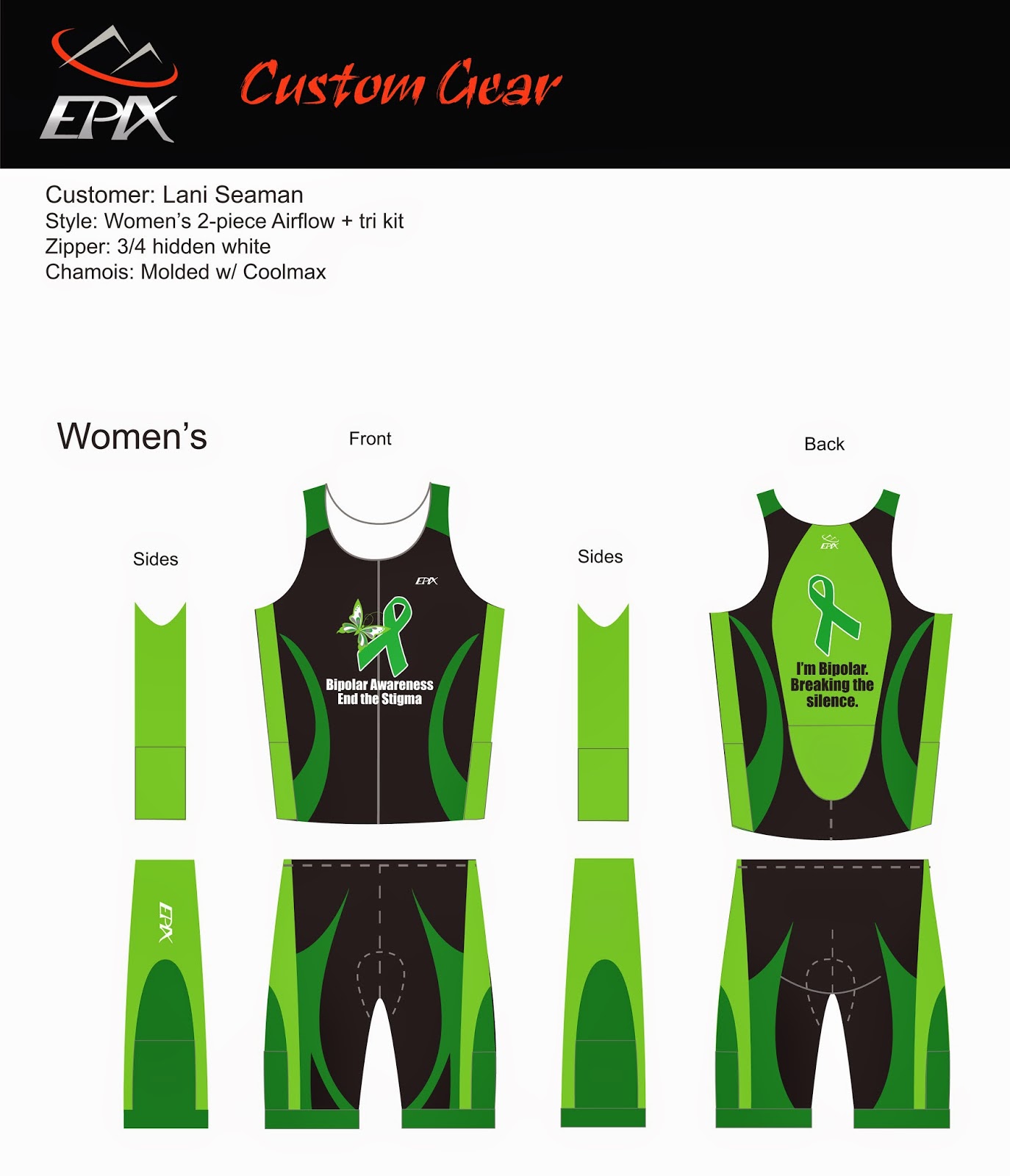 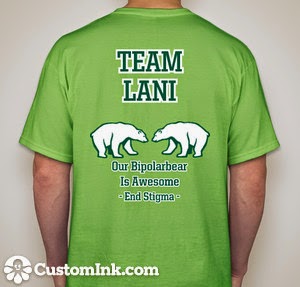 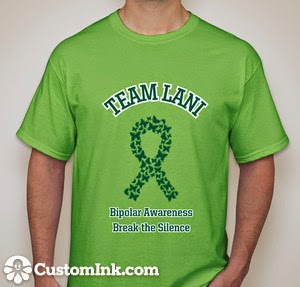