I basically only dust this blog off when I am feeling waxing poetic, and lately, I have been. It's been an interesting and tough few weeks to say the least.

There are many swim sets that I've done in my life that I still remember to this day. Mostly because I couldn't believe I could physically complete them and because I found a new gear in myself that I never knew existed. I can remember how I felt during them, the intervals we went one, and the paces I held. But there is one set that stands out over all the rest, and that is One Mores. Every year in the fall at UNLV we did this as a team bonding workout. It was one of the few times a year where we would have a women's and men's only practice since we swam coed most of the time. The premise is brutally simple, fast 25s from a start on coach's go. Brutal because you didn't know when the set would end and there were no intervals - you could get some rest, no rest, or something in between. I very much remember being halfway out of the water to dive in when I heard my coach yell "ONE MORE!" And off I went. The set starts with endless amounts of 25s and ends with elimination rounds. The goal for me was to always try to be one of the last few standing. I am proud to say that I made it to the final two women twice over my 4 years of college swimming (thanks distance swimmer endurance). Anyway, few sets have really challenged me mentally more than one mores did. It really was a team and individual challenge. If you fail, the team fails. So as the set goes on, the rallying cry of "ONE MORE!" echos across the pool deck between gasps for air and tears shed that were washed away in the water.

I have done 7 ironmans - finished 4 and DNF'd 3. All 3 DNF's ended in an ambulance. Ironman Tulsa was supposed to be my masterpiece. I finally felt like I had all the pieces of the puzzle - lost nearly 30 pounds, nutrition, fitness, mental toughness - clicking together. What I didn't see coming was a crash. I was completely blindsided literally and figuratively. It was scary and if I really let myself think about what happened, I freak out a little. The witnesses said it looked "horrific" and "terrifying." I've been feeling guilty that I wasn't more seriously injured if that makes any sense. I also feel extremely lucky I've avoided any serious injury besides whiplash, multiple contusions, a muscle pull, and a likely minor concussion. Someone was definitely watching over me and my bike (thanks Dad 😆). Any time I look at my damaged helmet, I freak out, but because I am recovering so well it is hard to believe the crash was serious. Basically, I am kinda a mental shit show about it.

So how do one mores relate to this?

As I was laying on the road, literally watching my Kona aspirations ride away, several things were going through my mind. The crash itself happened in slow motion. As I was airborne, the first thing I thought was "this is going to hurt." Sure as shit, it hurt. The first thing I felt was pain in my back. I knew this was not good. I was almost starting to panic because I thought I might be paralyzed. I could only feel the pain in my back (for a split second my mind went to that I could get into handcycling if I was paralyzed). As the witnesses to the crash got my helmet off and I started to take some deep breaths, I realized I could feel and move my arms and legs, but I remained on my side in case there were fractures. And let's be real, I was in a lot of pain, so fetal position felt the best lol. One of the volunteers called 911 and the minutes waiting for the ambulance ticked by excruciatingly slow, so naturally, I had some time to think. My first thought was to ask about my bike, but as the adrenaline started to wear off, I kept asking myself "how is this happening again?" My train of thought started to derail as I watched each rider ride by and I sunk lower and lower. Why me? As my thoughts start to go to darker places, there was one part of my brain that screamed "ONE MORE." And in that moment, everything changed mentally. I would come back from this, whether I needed surgery, had broken bones, or if something else was seriously wrong - I would come back from this. So what if this was my third Ironman ending in an ambulance?! I was going to come back from this. Because ONE GOD DAMN MORE.

In the two weeks since, "one more" has become my mantra. I've been making little goals with the big goal of finishing Ironman Lubbock 70.3 at the end of June. I don't really have goals for the race, just to get out there and enjoy it as I am not sure where my body will be mentally and physically at that point. I am healing quickly enough that I have to remind myself that my body went through a pretty traumatic event when I get down on myself for not hitting a certain power or pace. I think the thing that I am most proud of is that as soon as the ER doc said there were no fractures, I looked at him and my mom and said "I am walking to the bathroom and back on my own." It took FOREVER and it was excruciatingly painful, but 3 hours post crash, I went from backboard to walking and that was my finish line that day. Because just one more. 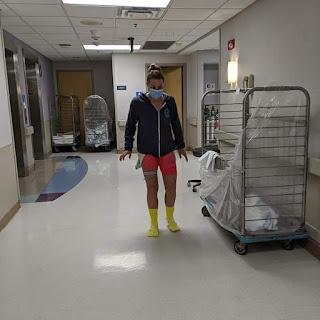