I should start this by saying I did not have the race I wanted, nor that I believe I was capable of. It hurt, it was slow, it was f-ing hot. I wanted to quit many times, but in all reality this race was not about me. I did Silverman not just for the challenge, but as a fundraiser for Wounded Warrior. Before Ironman bought out Silverman, it was known as one of the (if not the toughest) half/fulls out there and was a huge supporter of the wounded warrior effort. My FAVORITE thing about Silverman was the finish line. Tell me you wouldn't cry as you watched a team of marines/sailors/airmen run in with a comrade who had been severely injured overseas. POINT BEING - Silverman has been on my list for a long time and I finally got a chance to conquer it and raise money for a good cause.

In the days leading up to the race I hadn't been feeling great, but that isn't unusual since I always feel craptacular on taper, so I didn't think much of it. I was just happy to have a weekend away and was excited to race my last race of the season. Plus, I had two of the most amazing sherpas (my sister and niece) out there ready to cheer, so it was game time!

Race morning was actually beautiful. However, it got hot fast. Not surprising for Vegas in early October and no clouds in the sky (they really need to move doing Silverman back to November). Unfortunately for my age group, we were in wave 16 of 18. WAVE friggin 16! Come on lets mass start this s**t! Lucky us, we got to go after the majority of the slower swimmers. So a pretty calm lake day turned into an adventure of navigating a crap ton of chop and running over people. NOT HAPPY. So I was left with a slower than usual time for the swim (I was still 7th overall female so I can't complain too much). Additionally, my low back decided it was a good time to cramp up (foreshadowing much?). I have never wanted out of a swim so badly. Anyway, after 28 min of slogging through a soup of people in the bathtub that is Lake Mead, I was free to get my bike out of the gravel pit that was T1. So far, so fun.

The Silverman bike course is 67% uphill with 4200 ft total climbing, so I was not expecting a fast bike split - I just didn't think I would be as slow as I was. I actually really like this course. It goes through the national park around Lake Mead. Challenging and gorgeous. A couple things you need to know if you ever ride it - there is no shade and pack a lot of hydration. The first 10 miles I actually felt really strong and I was passing people, just feeling strong in general. However, on the climb before turning onto Northshore at Lake Las Vegas my top left quad seized. Initially, since my left hip is one I have had issues with for the last decade, I thought I finally tore something (docs think I have a partially torn labrum). UUHHHHH - not sure what to do in this situation. Using my brilliant scientific mind, I came to the conclusion that if something was torn I could just get surgery after the race since it was off season. No joke - that was my smart decision. So I continued to ride and eventually my quad loosened up. Unfortunately, since I had no power in that leg, I was relying heavily on my right leg, which was now cramping as well. And so began the last 30 miles of hell. I pretty much went into crisis mode at this point as everything from my low back and below was in various states of cramp. L-O-god damn-L. Its a very long, lonely, ride to be going that slow. I pretty much wanted to quit, but I kept telling myself to make it to T2 and then go from there. I really wanted to just throw down my bike and cry. I was so pissed I trained so hard only to have this happen. UGH. Once I started thinking that people would think less of me because I was going slow, I decided to pull my head out of my ass and quit my pity party. I remembered just exactly why I was doing this race - wounded warrior. So I told my legs to shut up and focused on getting to Henderson one slow revolution at a time.

I should state this now - I have never been happy to get to the run in any race I have ever done, but seeing T2 was quite possibly the most beautiful thing I have ever seen. Plus, I really, really had to pee. Anyway, my bike dismount was a thing of beauty. I pretty much came to the conclusion 2 miles prior that I was going to have to do a "controlled" fall to get off my bike, since I couldn't really lift my legs. FANTASTIC dismount! Luckily for me , I looked like complete hell so I had about 3 volunteers trying to stand me up and get me to my run gear. No one believed me when I told them I was fine. My sister tried to tell me I looked pretty bad at that point (I couldn't stand up straight), but I was convinced I was just being a wimp (seriously?!). Welp, mental check - nothing is seriously injured, can I keep going? 7 min (holy crap) later I made my way out of transition to survive my last 13.1 miles. I saw my sister and AJ standing by the chute to get out of there and I gave AJ hug, told them I had bad cramps, wasn't anywhere near my race goals, but I will finish. It totally made my day that AJ said I was doing great!

SECOND WIND! The run is a 3 loop course that consists of a big downhill and a big uphill. That first mile I just went for it. I figured I had nothing left to lose, plus I was going downhill. Actually, the whole first loop I felt pretty solid. It was not until right after mile 5 that I really felt something. I mean I really needed to vomit. Frick, I love triathlon. So I tossed my cookies and told myself to puke and rally. "Rally" is a relative term. I don't really know how I made it through that second loop. I was so dizzy and getting really swollen at that point. However, once I saw Kari and AJ cheering again, I found my 100th gear and made myself get through those last 4 miles. Somehow I managed to waddle/run that last loop. I refused to walk and kept telling myself I was doing better than everyone else. Which I literally was, most people were walking and there was a guy passed out on the sidewalk that didn't look so good (don't worry emergency responders were there). I passed by Kari and AJ for the last time with 2 miles left. 1 mile up and 1 mile down. SOMEHOW I MADE IT. All I wanted was that finish line. FINALLY! I crossed and I guess I looked pretty bad again, because I was swarmed by people making me sit down, dumping ice on me, and shoving water in my face. In reality I was not ok, no matter what I kept telling myself. But god dammit, I made it. Once they deemed me ok enough to walk on my own, I headed to find Kari and AJ. Kari looked at me and said "wow, your legs are really swollen" and my reply was "yeah, I don't feel good." AJ told me I did so awesome and gave me a big hug (great kodak moment!). It was at that point I realized I wasn't upset with having a bad race. In fact, I was actually proud of myself. I wanted to quit about a 1000 times during the course of the day, but I didn't. I push through pain I had never experienced in my life and when through a whole gambit of mental games. Also, I had finished Silverman. One of the toughest courses on the circuit. It is the first and last time I do Silverman. Unless, of course they bring back the full. Then I have to do it to say I did it (9100 ft climbing on the bike, and 2200 on the run -yep). 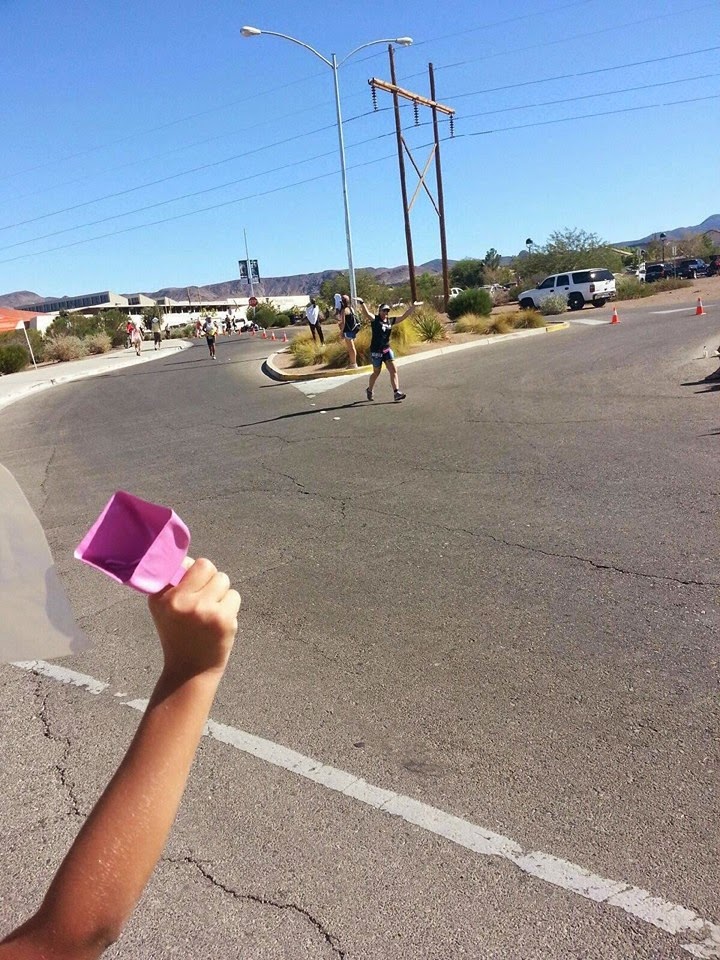 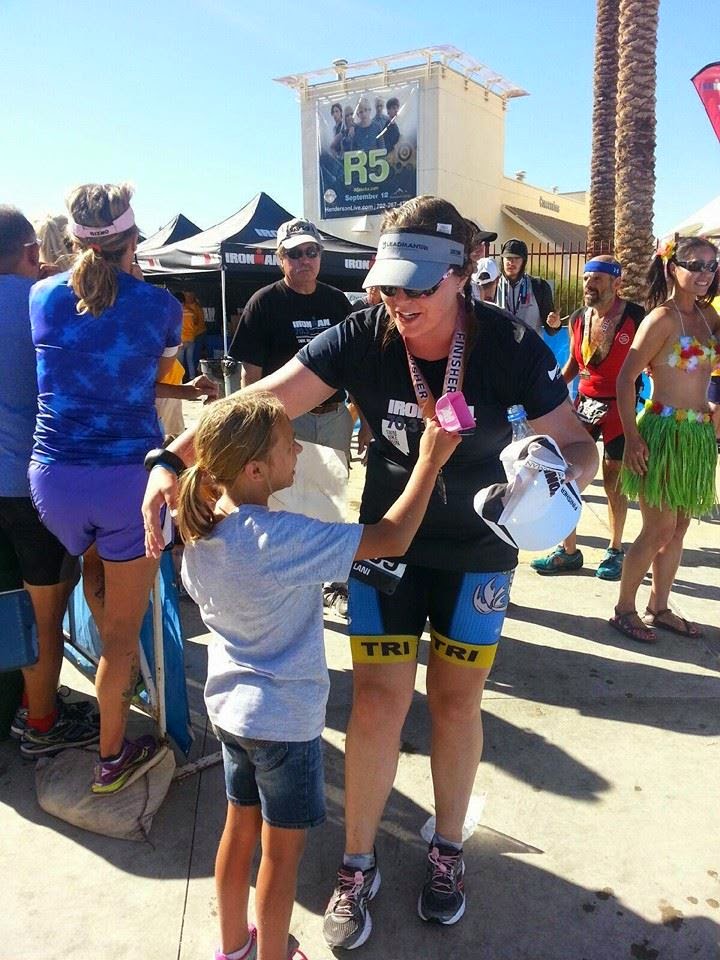