A tale of 3 miles

On Sunday I participated in a sprint triathlon near Santa Fe. I figured it would be a good race to do after Buffalo Springs to get back into the racing mode. However, this course is not for going "fast" or PRs, its more of a torturous slog for survival. Just to point out how hard it is, the top finisher's 5K time was only 26 min and avg bike speed was 17 mph. Ouch.

The night before a race is always hard, but this one in particular. I could sleep at all! I think I only slept 3 hours total and could not sleep past 330. So I ended up just giving up and getting ready to go. I left around 445 and was at the turnoff for the lake when I realized I had forgotten my wetsuit. Damn damn damn! I don't like swimming in wetsuits, but they are faster and I need every advantage I can get (there a reason the title of this post is "a tale of 3 miles"). I made the decision not to turn back for it because I didn't wanted to be rushed - transition closed early at this one and I wanted to be able to get a good warm up in. Once I got there, I set up my area. Unfortunately, we were racked downwind from the lake restrooms. It smelled so horrendous! It was even worse coming through transition later! Basically, I set up quickly, grabbed my swim stuff, got marked, and headed the swim beach, which was a 20 min walk (hike) away.

I had to wait 40 min from the Olympic starts until my wave so I got nice and warmed up and even helped some people who saw me swimming who wanted swimming advice :) The swim was actually a little rough. It started into the current and wind with the sun in your face. Awesome. Finally, we were lined up and I made sure to get into the front. Next to me wast a girl in an FSII, and I immediately I knew she was a swimmer. I knew I had to beat her! The swim felt awful! This was the first tri where I actually felt tired during the swim, but I knew I did not want that girl to beat me. It really is a point of pride. I started to distance myself at the 400m mark and just built the last 400m. I came out first, 8 seconds ahead of her.

Since I had no wetsuit, I got through transition fast, but so did the other swimmer. Now, like I said before this course is slow and painful. Right out of transition you head up the boat launch road which is pretty steep (it was actually terrifying coming back down). I knew I did not want to waste a huge amount of energy going up that hill since there were still 11 more miles with more hills to bike after it. She shot out of transition and up that hill and I noted she was in the hot pink helmet. After I got up that ascent, I turned on to the road on top of the dam, which is full of gravel and plants sprouting through along with metal grates. Wonderful. I kept pink helmet in site and kept building my pace. Once I hit the turn around in the loop, I realized I was gaining on pink helmet. I really started to hammer the pace and hit the last hill fast. I entered transition not too long after pink helmet and told myself that she was a swimmer and she probably sucks at running too - maybe I can catch her!

Sweet! ONWARD- let's catch this b****! The run course followed the same as the bike for awhile and we had to go up that same very nasty hill. The first quarter of the hill I was catching her, but then I started to feel nauseous and ended up tossing my cookies on the side of the road (sorry spectators!). Ugh. Instead of doing the smart thing and holding my mental game together, I started to panic. Panicking while running uphill makes it very hard to breathe, so I had to slow down to take my inhaler. Great. So on went this first mile of wheezing, puking, and thinking I couldn't do it. I spent the second mile of the race feeling sorry for myself - I told myself I didn't belong in the race, that I would never be good at running, and that I should just give up since I was going to get passed anyway. Great attitude right? Sure enough, I got passed by a couple more girls. Again I got more frustrated, but then I saw another girl catching me coming up on the last mile and I got mad. I got my s*** together and started to RUN. She didn't catch me. I ran the last mile in 8:30 (still not my best, but for this course and all my self-loathing it was great). I finished hard and I sicked up once more after I was done, but I was happy I finished with nothing left. I regret that I had not just pushed through those first two miles, but I think that is something everyone goes through. It took me years not to be self-defeating in swimming, so I am still learning not to be my own worst enemy in triathlons. I still managed an ok race, even with my horrendous run, but like I said, I was the one who failed the run. Not my training, not my muscles, just me. Regardless, I still got to stand on the podium and enjoy some post race bbq and meet some local triathletes in the area. Additionally, this race marked my 2 year anniversary of my very first triathlon, so it was very fitting to race over the weekend! 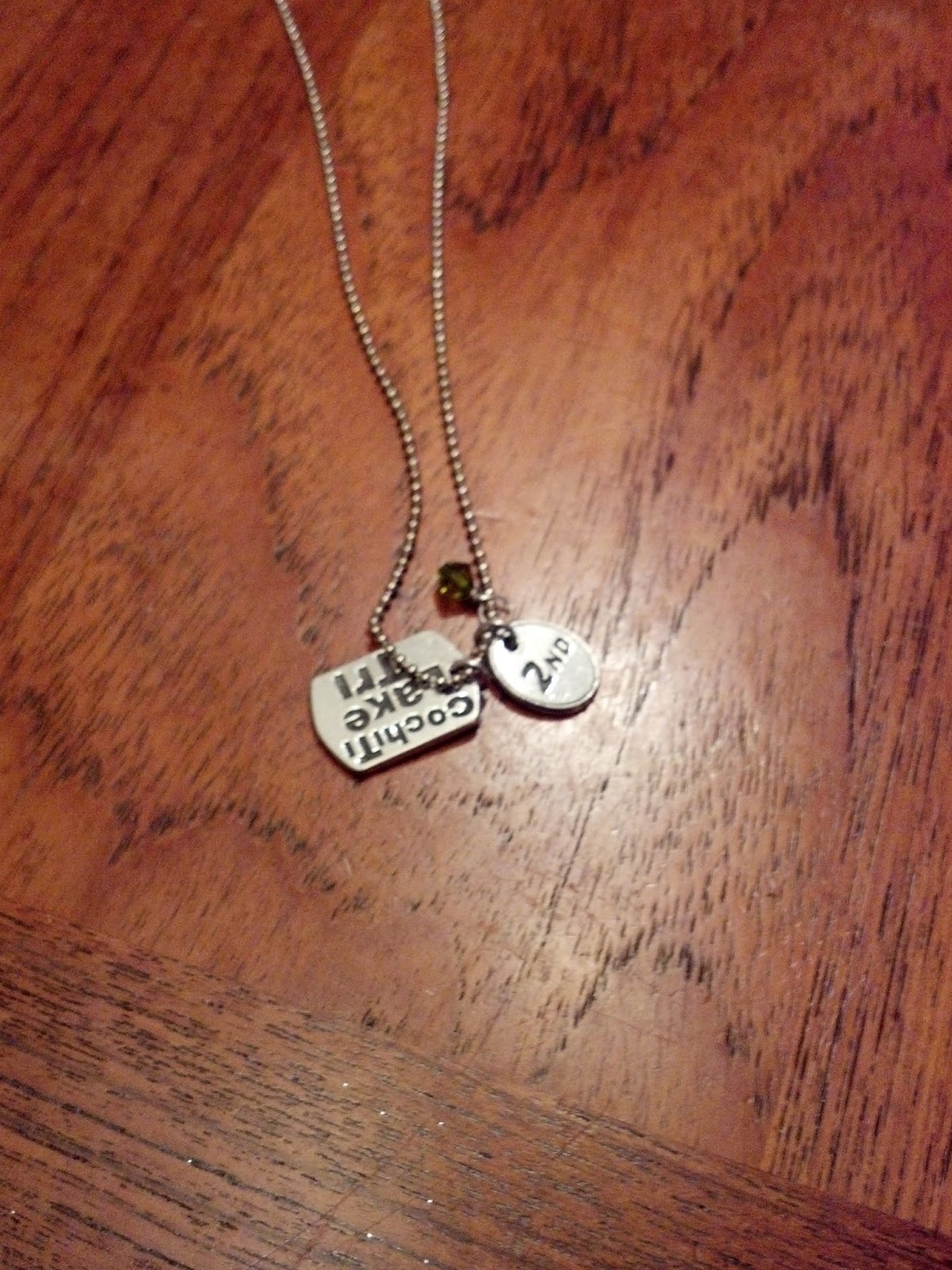 Charm necklace awards? That is new to me!