There have been very few times in my life where I have been ok with not winning. This race was one of those times. As most of you know I participated in my first half ironman over the weekend. I had two goals for the race: 1. finish the race and 2. finish under six hours, which I did (5:55 was my overall time - even with a sub par run). Today I have been reflecting on the race and I still can't believe I actually finished and I think the adrenaline is still going! I think the last time I felt this accomplished was winning the mile in college (ok maybe a little when I got my PhD). Moving on to the details:

I can't even convey how nervous I was for this. I didn't want people to think I was slow, I was worried about not finishing, and scared of how bad it was going to hurt. Surprisingly, I was able to sleep the night before, despite the racing thoughts, and I woke up with a more positive attitude. I was told that the way into the lake gets backed up, so I got to the race site early (430 am!). I walked down the hill (the same one we had to bike out of transition), got marked, and set up all my stuff. I started to feel a bit better when I was talking to the girls around me about how this was their first 70.3 too. My parents and Logan got there around 610, so I got to see them before my wave went off at 642. I got nervous again at this point and nearly started crying in front of my mom! Regardless, I got down to the water and started to warm up and get ready to go.

The swim course at this race is awesome! Nice, calm water, warm temperature (74 degrees!), and a current in your favor once you loop back to transition. I lined myself up in the front, so I wouldn't have to deal with most of the scramble and once I heard the word "go" I sprinted my way to the front and settled into a rhythm. Normally I get a sizable lead, but I actually had a girl stay with me. Since this was a big race I did expect it, and I really enjoyed having someone to draft off of. We were together the entire swim and even caught the first wave of men! I am pretty sure I edged her out coming into transition and I split 24:30 which was 2 and half minutes faster than my goal time. I ran up the ramp feeling pretty good and got myself set up for the bike.

First, I will start by saying the bike course was rough. They weren't kidding when they said it was challenging and this isn't the best half for first timers. However, I actually really enjoyed the course. Coming out of transition, you immediately hit your first big hill. Seriously, it was evil and brutal. Right after that one is another big hill. Seriously??!! I just kept telling myself that you have some nice flats coming up before the next canyon. The other part that is annoying, is that you have the men you passed on the swim flying by you on the bike. Eventually, I stopped focusing on who was passing me and settling into my OWN race. Once I did that the time flew by. There were some more big hills to get through, but training here in Santa Fe really helped with those, since all my rides consist of hills, hills, and more hills. I was also focused on staying hydrated and eating regularly, which really helped set me up for the run. I finished in 3:02, which was right on my goal of 3 hours.

Coming into transition was great. My parents and Logan were standing right there getting pictures and I was still feeling good and smiling! I grabbed my run food, salt, and was off for an adventurous half marathon. The first and last 3 miles of this course are awesome. Nice rollers and flats. I started off at my goal 9:30 pace, but it started to creep up. I didn't feel like I was dying, it was more like my muscles just wouldn't go any faster. I stuck to my nutrition plan and began the ascent out of the lake area. Hills. More f-ing hills. Not just steep hills, 9% grade hills. Ugh. I just kept looking forward to miles 5-8 since it was flat, but it was also the hottest part of the course. I knew I was tough enough to get through it, but I was upset that my pace was still off. I started to count down the miles and once I got to the half way point I knew I was going to finish. It definitely helped my attitude and gave me a second wind. I knew I was still on pace to be under six, so I just started counting down. At mile 9, I had to go back up that damn hill, but then you begin your descent back into the park. The downhills were steep enough that I may not have a big toenail soon - I have some very bruised toes and swollen feet. It was hard not to focus on that, but with 2 miles left I heard the announcer from the race site. I could not wait to cross that finish line. Those last 2 miles were the hardest to get through, but just as you want to stop, the finish line comes into view! I saw Logan and my parents again taking pictures and I am sure I look great at that point, but what a thrill it was to cross that line! My run time was 20 minutes off my two hour goal, but hey, I had just finished a half ironman and I was under 6!

Sweet baby jesus, I did it! And now I circle back to my opening lines; I finished 7th in my age group, which is not my best, but I gave what I had on the course and I really don't care where I finished. Now that I have the first one out of the way, I can work towards getting better. Today I am sore and sun burnt (I need to get better sunscreen), and may lose my toenail, but I seriously feel like I am on cloud 9. Additionally, it was really cool to see my friend Liz get her Vegas 70.3 worlds slot. I am also looking forward to cheering on/ironstalking my friends from Santa Barbara who are doing their first half at Vineman in two weeks (get ready for the pain guys!). 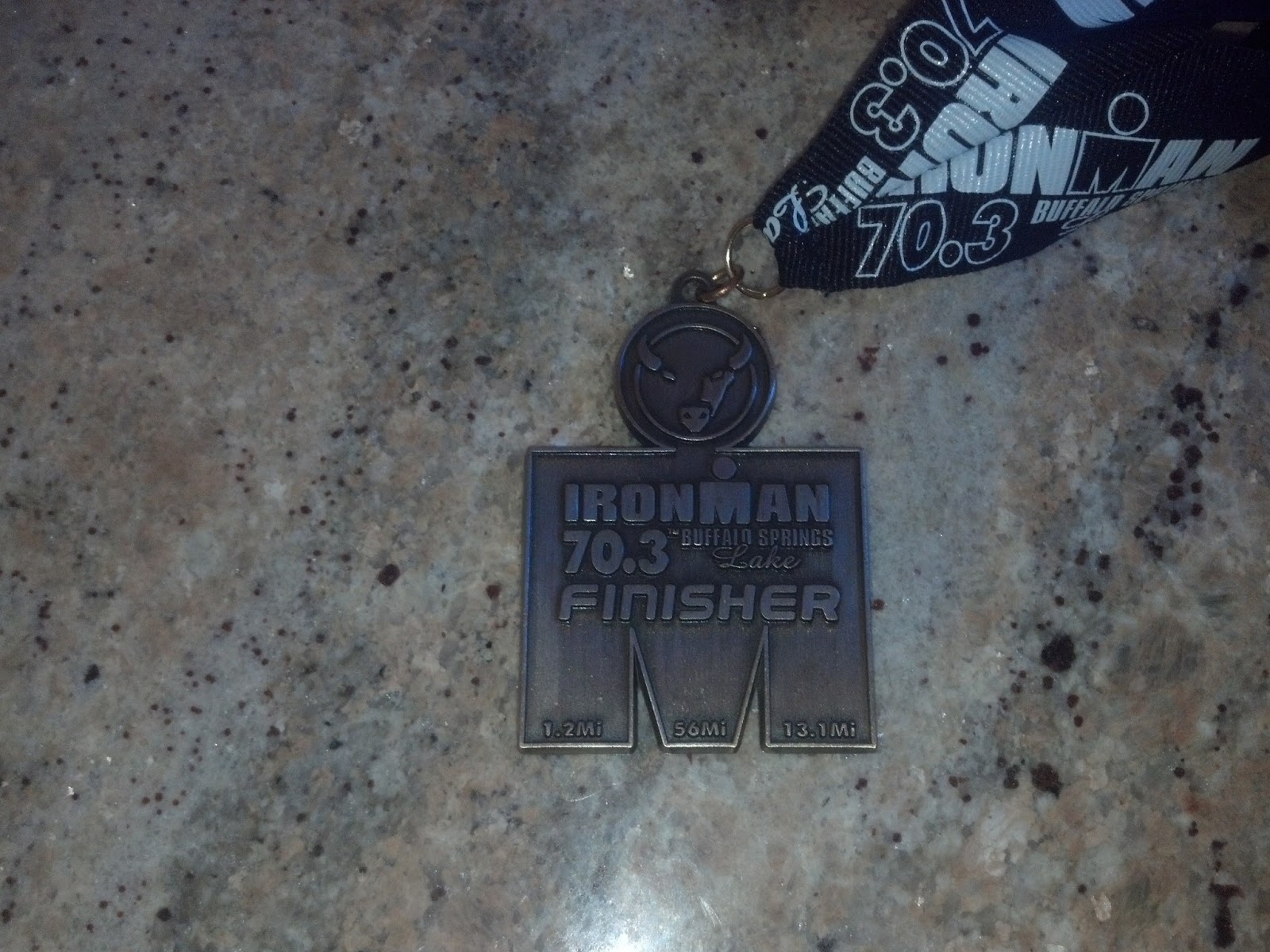 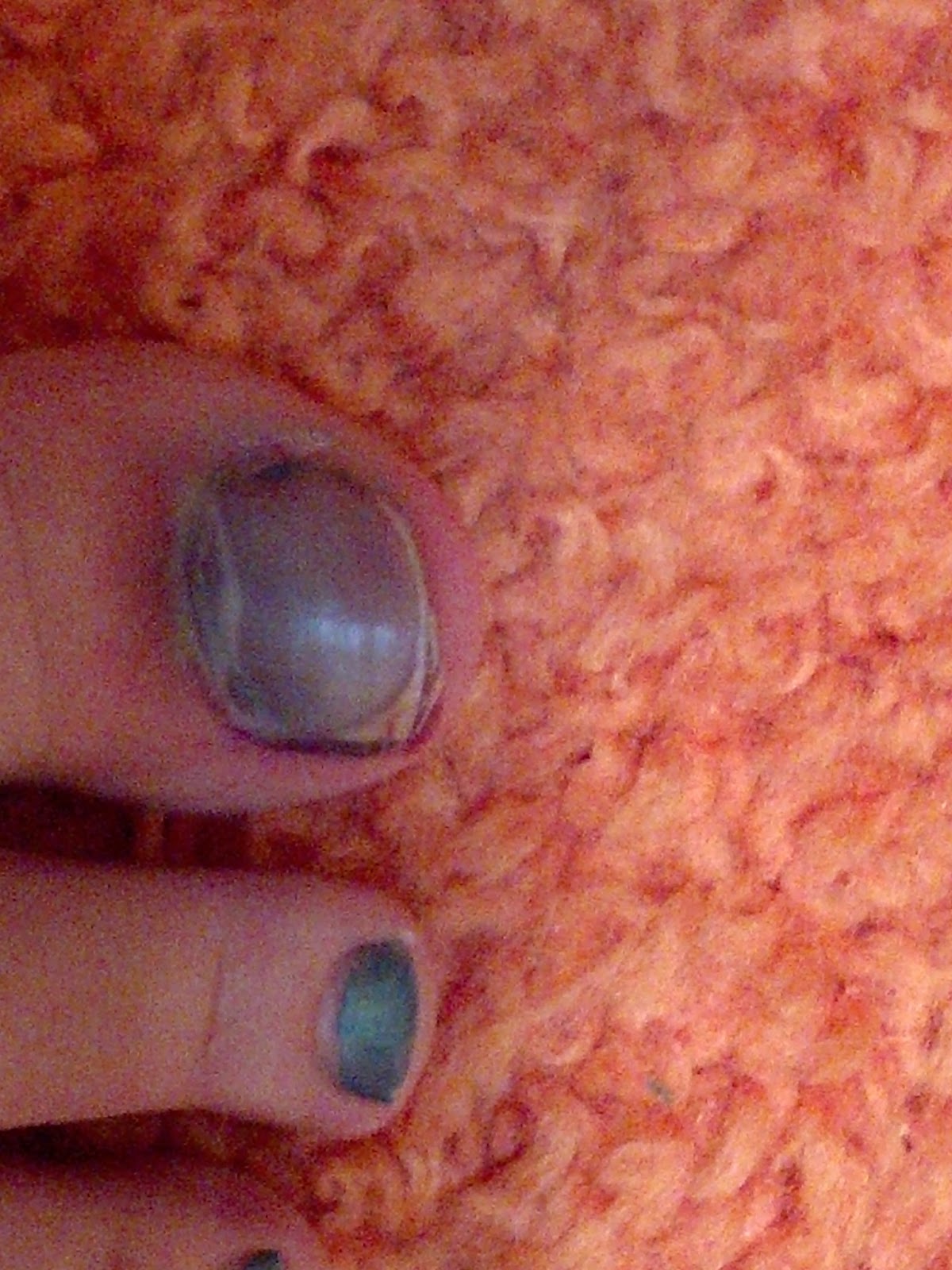